Here finally is Part #2. I was planning on posting it around Christmas Day, but I did not have Internet at my residence, and wasn't really in the brave mood once I did again. There is a Part #3 that is half-written (I'm going for 2 pages each part), but that may be the last section I finish. My writing mood got dampened by losing my comfy chair for almost a week [adoptive brother's girlfriend sprayed the covering with perfume as a 'joke' (I'm allergic). And with waiting for the Bell-Aliant technician & holidays I didn't get to wash it right away.] & the losing Internet business. It's now been pretty much wiped-out because I saw something that I read as/felt like "Things are better now that Cassius is dead.". It hurt, but it doesn't matter if I get into those feelings--especially not here. But it has made me feel pathetic about writing this, and the drawings, or anything else I have done, and kind of ripped-out the 'permission' feeling I had to do/post stuff. I had wanted to have this backstory as something I'd continue, an ongoing project to get me to work on other things (and get to Robin whom I never have before). I wanted to get out of that annoying 'sentence. sentence. sentence.' thing (I fall into but don't notice while writing) at least. But I feel idiotic & awful about it right now, so I don't know if I'll do anything beyond Part #3 or not. I can't even fathom a timeframe for me to finish/post that part either.

In this part Lorel tells her Uncle Frederick about her evening. And despite being nervous, her & Alfred meet-up as they planned (the meeting is in Part #3).

Here is a fill I made for 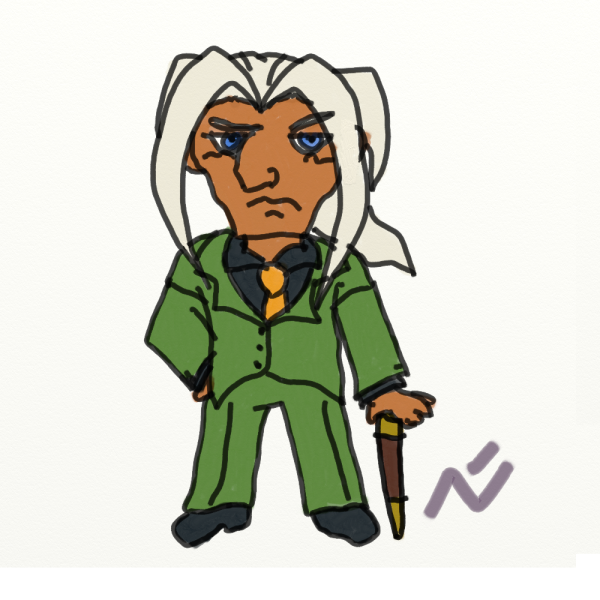 I have had this scene in my head for years, but either never got around to working it out, or didn't feel 'allowed' to post it. This year I'm trying to do things for

fandom_stocking (my stocking is {HERE}, by the way.) though, and wanted to get into capacity for writing other things so I decided to start work on this first. I am working on the next part now (about 300 words in at 10:05PM 12-20-2013) but thought that I should split it up after the last sentence sounded like an end.

This is how Lorel & Alfred met. I have ideas for, and used to think of writing out little adventures they had as partners, but I doubt I ever will. But this part here is about their first meeting. For those that don't know; Alfred is Lorel's spouse that was murdered, and also was her teacher & partner at the inquiry agent office they set-up (L & A). His murder was the reason she started her quest for vengeance, and why she took on the persona of L.S. Cassius & went to The 'Neath/London.

I found a .PDF of "Howl's Moving Castle" so I have been re-reading it while brainstorming for 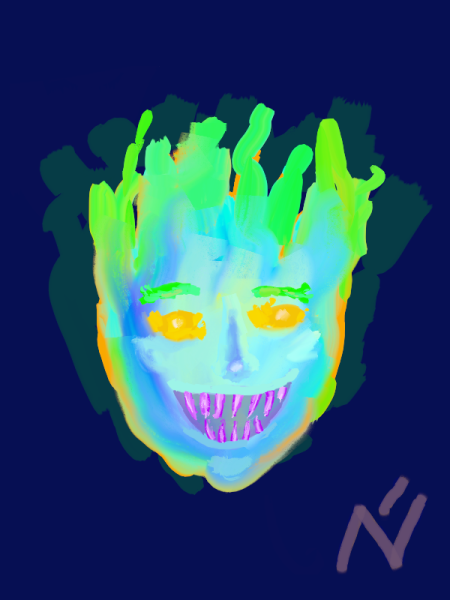 ~~~~
“On the other hand,” Sophie continued, looking into the orange flames, “if the spell was off, I’d have my heart eaten before I could turn around.”

On reading I got an urge to paint Calcifer, so I installed ArtRage 2**, and after some work I got my tablet installed on R-2E-054 too. This is going to make doing more like this so much easier. Sitting in a comfy chair in a nice warm kitchen, instead of freezing while sitting at my cramped table.

This is after I "Transformed All Layers" in ArtRage 2 just to move it to screenshot it as smooth. I also added a layer of 25% Soft Light in orange [in OpenCanvas 3.03e] because he looked too cold. I went by the novels' desciption of him, but in my head I have a more combined image of the anime movie & the novel. I love taka0801's version.

**{ http://www.majorgeeks.com/files/details/artrage_2_free_edition.html } ← The free edition. I have the full version. 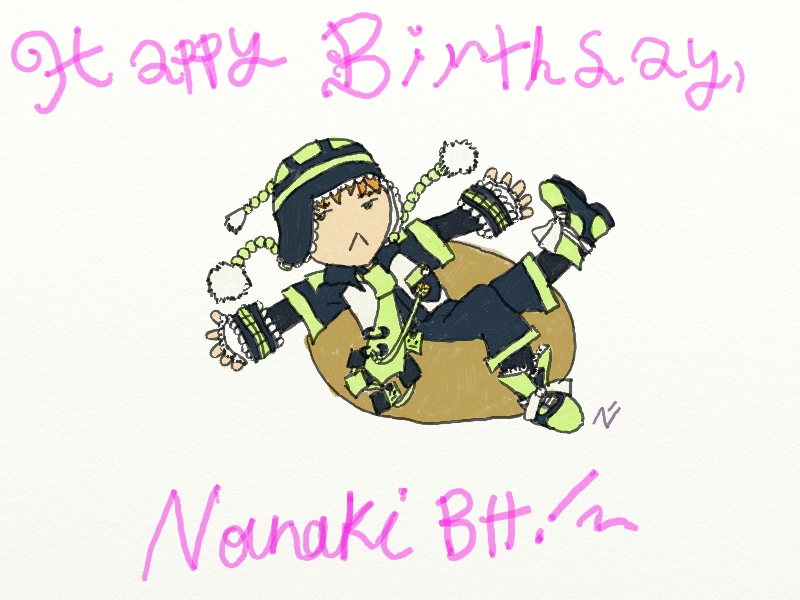 A picture of Noiz from "DRAMATICAL Murder" falling into a doughnut, for @flagfighter!

This is only my 2ND DMMd fanart, even though it consumed the month of July for me, and I'm still all *squee* about Clear. I have an idea for 2 Clear/Aoba drabbles, but I've been having crushing bouts of feeling pointless, so I never bothered typing anything. My 1ST fanart was a sketch of Beni [Beni is the best!].

nanakibh once posted as a 'Noiz song'.

I might as well upload the lineart & the original sketch! As you can see I originally had drawn Noiz's facial piercings, but they looked weird or like I had given him a pig snout when I went over it with marker. No nose & exaggerated mouth and all!

ahnjehleehn wanted references of Lorrie to draw for me, so I've uploaded most of the images that I have (and a few that just looked like her). Anyway they are at the link below.

Not exactly my own work (I did make them transparent though?), but I figured this fit more over here than on my own journal-journal.

EDIT---
I planned to do these for a long time, but *meh* [see above edit]. I didn't know how to sort these so went with the Participant reveal numbers. Please DO NOT repost these elsewhere, please link back instead or ReBlog my updated Tumblr post!

A reminder that I have Anonymous comments enabled on here and my main LiveJournal. It's not hard to contact me, just hit me up in the comments! Or send me an Ask on Tumblr/@Mention on Tumblr :}

Here is a placeholder for a possible "Howl`s Moving Castle" drabble as it is May Day. Which is the day when Sophie first meets Howl. I want it to be posted on the first of May, but I am too exhausted from 7 hours of yard work to type-up the idea I have. And I`m going away tomorrow, so I might not be able to get at it for awhile.

I've been trying to clean-out my GMail Drafts, and I found this:

"Welcome!" Said the host of what was apparently a game show. Let's call him Mr. Opai since the author of this lame story is currently playing KoL. The host was a short British man...well maybe he wasn't British but he sure had a nice accent. "You have been brought here from your cabins, to participate in various mini games for the amusement of various mysterious observers.

"Yo! Like where is 'here'?" Piped up the oddly dressed girl named Shei.

"Here is a small structure located underground of The Lost Woods."

"Well where are the mini games?" Asked a young red haired boy, which the author is too lazy to name.

"Once we have sorted out where each of you is from we shall begin." After each person had finished proclaiming what cabin they were from, Mr. Opai spoke once again. "Now let use start with our first event!"

A square hole began to receded into the center of the floor, then it filled up with water. Small platforms floated up to the surface. A touch appeared in a *poof* on the other side of the pool.

"The object of this game is, to take a wooden torch and light the other torch at the other side of the pool."

"How are we going to do that? Run around the sides?"

"No. You will hop from platform to platform. The two fastest will advance"

"What about the slower people?"

"You will be sent back with out any points/prizes. Now we shall begin with Cabin 1's player" A torch popped into Cabin 1's representative's hands. "Go!" The loud whistle that sounds when you play any Mario Party mini game blared.

Before any game could start however, The Lord got a frog in one and the map was over.

I have no idea what it was for or anything behind it! 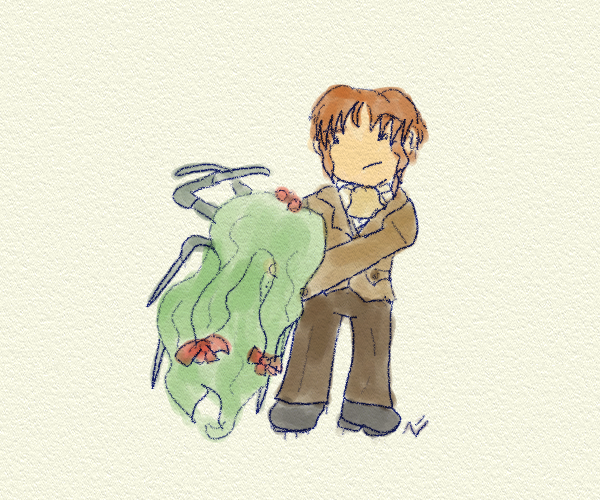 "Darling and lethal as vampire-kitten. Use a long-handled comb."

This was quickly drawn for Alexis Kennedy as an attempt at a thank-you. He sent me a
Luxuriantly Coiffed Sorrow-Spider after I e-mailed about my fuck-up of not knowing the Rose-bearing Maggot was only worth 3 Masquing and only if under 25 Masquing total. So thus after over a week of grinding for Gifts of Scorn, purchasing a bunch of Nex on Robin's account, and trying for over a day to draw the Lilac card again, I was 3 Masquing short of the Companion I wanted--Lettice, the Mercy (I got the Canny Costermonger earlier in the week as I was reminded of Lorrie). I had the choice of giving-up, or trading-in the Promissory Note for Intimate Favours I also bought, or waiting to see if Lettice became available another way. Given how horrible this month, and especially this week has been, I had taken the give-up option.

I expected no response to my e-mail, and felt silly for having sent one. But at 9:15PM AST I got:

Also another thank-you to Gabriel & Jamie for last-minutely sending me the 2 Masquing items I wanted but the Robin's account does not have the Connected for. Mr. Morgan sent me the Glass of Teeth, & Imeja sent me a Key-to-Heart Dagger.
Collapse